I’m thrilled to announce I’m upgrading my website. At long last! I’ve enlisted the services of a Hobart-based company called Sarox. They look like they know what they’re doing – young, innovative and full of enthusiasm. With the help of Sarox, I’ll be jazzing up the site with a sparkling new design, signup capability, newsletter, information about upcoming releases and interviews with other Australian authors. Mainly crime fiction writers, but also authors working in other genres.

I had hoped to have lots more books out in the public domain in 2019, but for several reasons, that hasn’t happened. The anticipated publication date of Sold to the Devil is now early 2020. My publisher has been rather too successful for her own good (well, for MY own good), landing some terrific new authors. They are definitely worth checking out.

But, I have managed to knock out my collection of tweets in an illustrated book called Boyd and Sarge – NYPD Law & Disorder. You can get it on pre-order here. Wonderful illustrations by talented cartoonist Vince Steele bring the characters to life. Many thanks, Vince! The reviews for this future comic classic piece of Twitterature are already coming in! Here are two of the best so far.

I am definitely one for humor, be it a chuckle, a snicker, laughing out loud, or full-out rolling on the floor. In the poker game of humor, Blair Denholm’s Boyd and Sarge: NYPD Law and Disorder dealt a royal flush.
Sarge has to be the most put-upon police sergeant at NYPD, having to endure a police officer like Boyd. Sometimes I can imagine Sarge thinking that double entendre Joan Crawford said to Jack Palance in the movie Sudden Fear: “I was just wondering what I’d done to deserve you.” Blair’s use of the word prompts are highly creative. There are times when his humor is subtle, when it catches the reader a beat after the piece is read. Other times, it is in your face, and one is rolling on the floor in belly laughs. At the end of the day, these characters leave you laughing, and the illustrations by Vince Steele only add to the fun. And being a fan of Law and Order, I can imagine the character of Lenny Briscoe standing by, ready with a wisecrack.
_________________________
Boyd and Sarge are the busiest pair of comic-cops in the world. Not only are they fighting crime on the streets, but also battling their personal demons, and verbally fencing with each other to hilarious effect. Sarge spares no punches, but Boyd bounces right back up with the most outrageous explanations. The mis-adventures of Boyd and Sarge generate a laugh a minute – each tweet-sized piece is a brilliant, tongue-firmly-in-cheek commentary that uses the pun to dazzle and delight.
And finally, work is progressing well on Revolution Day. Hopefully this Russian crime thriller will be ready for publication in a few months. Crossing those fingers tight! 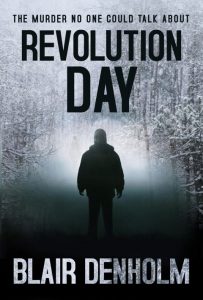