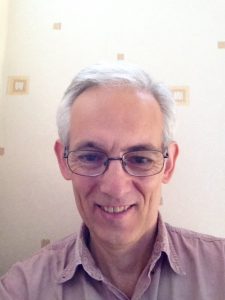 A long time ago in a galaxy not that far away, Andy Redsmith was born. He grew up in Liverpool and Runcorn, went to university in Salford, and has lived in Manchester ever since. He says the people there are great, but we don’t talk about football.

He worked in the computing industry for long enough to remember ALGOL (a language that’s not quite as dead as Latin, but well on the way.) Over the years in IT he has worked with some very clever people and some complete weirdos; none of whom bear any resemblance to the characters in his writing. Honest.

He has a wonderful wife, one grown-up son, and a loft full of old Marvel comics. He says he’ll get round to selling them eventually. That’s the comics, not the family.

Genre: Fantasy crime comedy (Yes, that is a genre. Well, it is now!)

Synopsis: In modern-day Britain, a policeman discovers the body of a crucified fairy. There’s an army of demons on the way, but before he can stop them the policeman must overcome one major problem: he doesn’t actually believe in magic.

Yes, I admit it – I do.  Because my real name is Andy Smith, which is a bit dull and boring. I blame my parents for not christening me Ozymandias – although that would have made life difficult in school. So, I thought, I need a pen name, and it needs to be something appropriate. Let’s see: I’m writing about a policeman, or, in UK slang, a copper.  And, where a blacksmith works with iron, a redsmith is someone who works with copper. Since I’m a Smith working with a copper, that makes me a Redsmith. So it’s logical. Sort of.

I wanted to write something that mixed genres, so I could produce something a bit different. I’ve never seen any reason why you can’t have Fantasy, Sci Fi and ‘real world’ all co-existing. I guess that stems from growing up with Marvel Comics, where they have superheroes, secret agents, mad scientists, magic, vampires and all sorts of other things in the same universe. Plus I wanted to write something funny. So, I thought, how do I pull these disparate things into one story? Can I write a crime fantasy science fiction comedy? Answer: No, I can’t. That’s just too manic. But could I write a fantasy comedy based around a detective story? Yes, I thought, I could. So I did.

Book 1 is called ‘Breaking the Lore’. Why? Well, there’s crime. And there’s folk lore. So it’s a terrible pun, but it works! It’s also partly inspired by the classic Judas Priest song ‘Breaking the Law’, which is what I’d like to have played over the end credits when the book is made into a film. (Steven Spielberg: you know where to find me!) Book 2 is called ‘Know your Rites’, which is basically continuing in the same vein, and subsequent titles will doubtless be equally bad puns.

They’re about a detective in modern-day Britain, who discovers elves, goblins and various other magical creatures living amongst humans. Not just living, but getting mixed up in murders, attempted coups, and various other lunacy. In each book the cop has to figure out what is going on and whodunnit (or, sometimes, whatdunnit), while these strange beings help his investigation – or sometimes hinder it. Each book works as a standalone story, but also continually develop the ideas of the series. So they’ll work even better if you read all of them in order. (Hint!)

Many people who have read the books have different favourite characters, which I think is great. My personal favourite has to be Inspector Paris, the policeman, because he’s basically me. (You would think that, with talking animals, invading demons and impossible cases, his life was bad enough already. But no; his personality is based on me. The poor soul.)

I’m working on the third book in the series, which has been delayed due to a family illness, building work at home, and various other things. But it’s coming along.

What other authors are you friends with, and how do they help you become a better writer?

I’m a member of South Manchester Writers’ Workshop, which is a “read and critique” type of group. You get different perspectives on your own writing, and also get to hear (and learn from) a wide variety of styles and genres. The best advice I could give anyone who wants to be a writer: join a writers’ group.

I do read them, because I like to hear what people think about my writing. Obviously I prefer to have good reviews, but I don’t get upset over bad ones. Because I’m mixing genres and messing around with tropes, I always knew I wasn’t going to appeal to everyone. (And, let’s be honest, there’s no point in trying to, unless you want to produce complete vanilla.) So some people don’t like my writing, but other people do, and some like it a lot. That’ll do for me.

I’d never thought of it until you asked me this question. So now I have. It felt like a very strange thing to be doing!

Favourite song at the moment: ‘Ca plane pour moi’ by Plastic Bertrand. (Yes, I know it’s from 1978, but it’s been reissued after appearing in a Cornflakes advert. It was silly but good originally, and it’s just as silly but good now!)

With writing, are you a plotter or (seat-of-your) pantser? Bit of both, actually.

Star Wars or Lord of the Rings: Star Wars. (But only the three original ones, parts IV to VI)

Number one thing to do on your bucket list: Buy a bucket!

Thanks so much, Andy. It was a pleasure featuring you and your original work! – BD