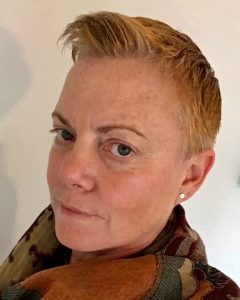 RL (Rachel) Smith is a Melbourne based writer. In 2017 she won the Scarlet Stiletto Awards Financial Crime Prize for A Gift of Thoth. Occasionally she performs at spoken word events, including most recently delivering a domestic noir flash fiction piece, Feet of Clay, for Noir at the Bar at the Terror Australis Readers and Writers Festival held in Cygnet, Tasmania, in November 2019.

A Gift of Thoth: Jane just wants to write, but a dead man keeps interrupting her.  She soon discovers sleepy seaside towns are not always what they seem.

Urge: When disillusioned ex-undercover cop turned private investigator Jude Lawson revisits a closed murder investigation, she uncovers a political scandal that could bring down the government, then finds herself in a race to catch the killer before they catch her.

I write under the name RL Smith.  My surname is kind of boring, so using my initials adds a bit of mystery…what is the authors real name? Is it a man or woman? What are they hiding?

There is an old notebook in a trunk in my shed from when I was eight years old full of poetry and very short stories. My personal favorite is a piece called ‘The Man Who Brushed his Teeth with Paint.’ I have always written poetry and had some success in poetry competitions, including a piece that was published on the walls of the  Deutsche Bank as part of the UNESCO City of Literature Multipoetry program in Krakow, Poland.

A friend who has read nearly all of my work once described my writing as a cross between Roald Dahl’s Tales of the Unexpected and Shane Maloney’s Murray Whelan series. Needless to say I was pretty happy with that.

I think I would have to say the genre chose me.  Originally I wanted to write a book about my experience of living in Portugal riding dancing horses in the 1980’s. For some reason I kept wanting to kill of characters. I read a lot of crime fiction, so when a wise writing tutor suggested I start with that genre, off I went and have never looked back.

A lot of the story in Urge revolves around opinion, politics, and desire. The dual meanings for the word as a noun (meaning desire) and as a transitive verb, (meaning to present, advocate, or demand earnestly or pressingly) lent itself nicely to the work.

There is a scene where my protagonist poses as a journalist to interview a disgraced politician about the scandal that destroyed his political career. The scene involves a lot of gross table manners which I had a lot of fun with.

The character of James, ex-con and queer sidekick of my protagonist is my favourite because he is outrageous, fearless and hilarious.

I have only just finished my manuscript for Urge and have got it to a stage I feel it is ready to start querying. I have also started research for my next book in the series which will have a political-environmental-crime focus.

Storm Boy by Colin Thiele set in South Australia about 11 year old Mike who lives on the beach of Coorong and raises three pelicans.  When Mr Percival died I wept.

Does a big ego help or hurt writers?

I don’t think a big ego helps anything very much as it gets in the way of relationships and learning, and causes a distorted self-image that can sabotage creativity – grandiosity has very fragile foundations. Having a thick skin on the other hand, is a valuable trait to help writers weather disappointments, rejections and criticism.

I enrolled in an online creative writing course and was lucky enough to work with a great tutor/editor who taught me about the techniques of story logic, structure, plotting, character development, and most important of all to develop a writing habit – it is better to write rubbish than not to write at all…

What do you owe the real people upon whom you base your characters?

Honesty. The character of James in my novel was loosely inspired by a real James who I worked with.  I asked him if he minded and gave him an early sample to seek his agreement to include the character – which he did.  I also gave him the final draft of the manuscript for comment before I started querying it.

I will be delighted if my novel is picked up, published and readers get something out of it.

I mainly write on the bus on my iPad on my long 1.5 hour commute to work so I usually get in about 2-3 hours a day.

What was your hardest scene to write?

There is one sex scene in my book.  I didn’t want to write it and kept putting it off because the prospect of the bad sex awards hovered in the back of my mind – eventually my characters insisted.

Favourite food: I rarely eat it, but lasagna is a childhood favourite

Favourite song at the moment: Water and Fire by Mama Kin & Spender

With writing, are you a plotter or (seat-of-your) pantser? I’m a hybrid

Best superpower: I can write anywhere

Number one thing to do on your bucket list: Find a publisher who loves my book