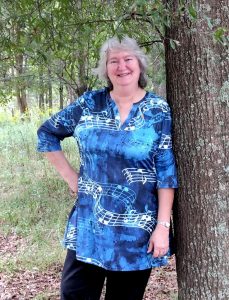 Edale Lane is the author of an award winning 2019 debut novel, Heart of Sherwood. She is the alter-ego of author Melodie Romeo, (Vlad a Novel, Terror in Time, and others) who founded Past and Prologue Press. Both identities are qualified to write historical fiction by virtue of an MA in History and 24 years spent as a teacher, along with skill and dedication in regard to research. She is a successful author who also currently drives a tractor-trailer across the United States. A native of Vicksburg, MS, Edale (or Melodie as the case may be) is also a musician who loves animals, gardening, and nature.

Book title: Merchants of Milan, book one of the Night Flyer Trilogy

Florentina, set on revenge for her father’s murder, creates an alter-ego known as the Night Flyer. Madelena, whose husband was also murdered, hires Florentina as a tutor for her children and love blossoms between them. However, Florentina’s vendetta is fraught with danger, and surprising developments threaten both women’s lives. 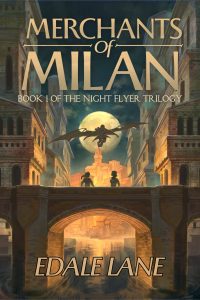 Merchants of Milan is the first book in Edale Lane’s Night Flyer Trilogy, a tale of power, passion, and payback in Renaissance Italy. If you like gadgets and gismos, rich historical background, three-dimensional characters, and fast-paced action with a slow-boil lesbian romance, then you are sure to love this series.

Edale Lane is the pen name I chose to write my lesbian romances under. I did this primarily so my audiences would know what kind of book they are buying. Since I was already established with several titles under Melodie Romeo in the historical thriller/horror genre, I decided writing my LGBTQ works under a new identity would help the readers to not be confused. Someone wanting a “two women live happily ever after story” may not be thrilled with corpses hanging on wooden stakes… but if you are, check out Vlad or Terror in Time.

Hum, that would depend on which “me” we are referring to. Edale Lane’s first published novel was Heart of Sherwood, which won the Rainbow Award for best historical lesbian romance. It places the Robin Hood story directly in the center of actual English history but with the twist of Robyn being a woman who disguises herself as a boy to hide from the Sheriff of Nottingham. Edale Lane also had a short story published in Less than Three Press’s Private Dicks Packing Heat anthology. If you mean the “other me,” first was Vlad, a Novel, by Melodie Romeo, 2002. It is a historical thriller about Vlad the Impaler and the unlikely couple who end his bloody reign. It is a graphic, fast-paced thriller featuring a mf romance. I had a number of short stories published in anthologies between 2014-2017 and last year I rounded up some of those along with several new titles into Terror in Time, a collection of eerie tales. Most of these are historical thriller/horror stories with a few contemporary and one comedic spoof.

What’s the story behind your book?

My thesis professor said that almost everything that can be written already has, so in choosing my topic I need to either search deep for something new or explore a familiar subject in an entirely innovative way. Heart of Sherwood is a completely different way of telling the Robin Hood story, so for my new novel I decided to go for a story-type that to my knowledge has never been used, a kind of “Batwoman meets Leonardo da Vinci.” I chose Italy and the Renaissance because I was able to locate few novels with that setting as opposed to volumes in Victorian England or Medieval northern Europe. My master’s coursework prepared me for this period and my mother loved da Vinci so I was brought up marveling at his genius. At first the Night Flyer was going to be one novel but as I started conceiving the plotline I quickly decided it would be too long, so I divided it into three: Merchants of Milan, introduces the main characters and completes the first act; Secrets of Milan deepens the romance and the mystery; Chaos in Milan brings everything to a head in an action-packed finale. I wanted to showcase Renaissance art throughout, so in book one Milan is featured. In book two the characters visit Rome where we see more great works, and in book three they visit Florence – a Renaissance art hat-trick!

The last. Throughout the story we see Florentina, aka the Night Flyer, as confident, daring, brilliant, and skilled. She exhibits all the characteristics of a super-hero utilizing unique gadgets and a one-of-a-kind flying device. He is always cool, calm, and in control. But in the last scene we see her vulnerable side as she is very uncertain and afraid. (I can’t tell you why or that would be a major spoiler!) It completes the character to see this side of her.

That would be Secrets of Milan, book two of the Night Flyer Trilogy. And while I don’t wish to keep my fans waiting too long, I do have a “day job.” Additionally, I am meticulous with research, rewrites, and editing, so I hope to have it finished by this summer. Want a teaser?

The Night Flyer had brought Florentina and Madelena together but now threatens to drive them apart. While Florentina searches for a mysterious underworld organization that has attempted to murder the woman she loves, Maddie struggles to deal with the danger Florentina is courting. Her brother, Alessandro, has become the most prominent merchant of Milan, but the Night Flyer uncovers a secret so shocking it could destroy them all.

Does a big ego help or hurt writers?

Plato sagely wrote, “All things in moderation.” On the one hand, too large (and undeserved) ego can severely handicap an aspiring writer. One must be willing to learn, to see room for improvement, and always strive to further perfect his/her craft. An overinflated ego will prevent an author from recognizing the need to improve. On the other hand, one must have a healthy opinion of his/her writing or it would never get published. A writer has to promote herself in order to be noticed. A lack of confidence severely limits a writer’s potential at getting published. Therefore, I conclude that a successful author needs tremendous confidence in the quality of his work balanced with a humility that understands he can always do better.

How many unpublished and half-finished books do you have?

The number is legion! I have a couple of shelves full of notebooks with unfinished handwritten manuscripts from my early days before computers. Then I have folders stuffed with novels and stories that I started and then decided they weren’t good enough. I keep them all because they are my children, but children not ready to be born yet. I wouldn’t dare discard one since perhaps one day I will go back to it and rework it into something wonderful. I also have one completed novel that I think is quite good but simply couldn’t place with a publisher. Now that I have created Past and Prologue Press, however… I know what I’ll be doing as soon as the Night Flyer Trilogy is complete. Watch for Viking Quest in 2021!

Winning awards is very rewarding, as well as getting great reviews. Sales are always satisfying. But for me literary success is when I no longer needing to drive a truck seven days a week and be away from home for weeks on end because I now make enough money from books sales to live comfortably. You see, even though I run my own small business, Driving Edge Transport, and make good money doing it, I am not a truck driver who writes on the side; I am an author who temporarily drives a truck for the financial benefits it provides.

What are the ethics of writing about historical figures?

I received a master’s degree in history from the University of West Florida and taught school for twenty-four years. Historical accuracy in writing is very important to me, but especially when it comes to representing actual men and women’s lives. I took great care in Heart of Sherwood to properly represent both Queen Eleanor and King Richard, and personally I think I nailed it – especially with Eleanor, the most remarkable woman of her time. And although Prince John remained in his traditional role as one of the “bad guys,” I think I was fair with him as well. Prince Vlad Dracula, the Impaler, was another historic figure I wrote about in Vlad, a Novel. I did a great deal of research on him in order to understand his character. And while he is remembered as a ruthless tyrant and a cruel man, he is also a bit of a hero to many Romanians because he so successfully dealt with the Turks and essentially prevented them from over-running Europe. So even though he is the “bad guy” in my book, I am careful to include the good things he accomplished as well as the horrible. In my opinion, any author who chooses to write about actual historical figures must do her homework and present as balanced and well-rounded view of the individual as possible, rather than simply throw in some big name from the chronicles of old and make stuff up about them.

Yes, I do. I want to know how my books are received, and I can learn from constructive criticism. I can give readers more of what they liked and less of what they didn’t next time. Good ones, naturally, boost my confidence and self-esteem, but I have had a few scorchers. It’s easy to feel personally wounded because a novel is like an author’s child and we don’t like anyone to attack it; but if it’s from someone I don’t know, I just shrug it off. You can’t please everyone all the time, and that person could have had a bad day and decided to take it out on me. Enough people have written great reviews that I can weather a few horrid ones.

Silliest saying: My mother used to say, “You can work wonders with rotten cucumbers”

Favourite song at the moment: Let it Go (Frozen)

With writing, are you a plotter or (seat-of-your) pantser? I outline and plan… then make changes as necessary as I go.

Star Wars or Lord of the Rings: ARE YOU KIDDING? You want me to choose? Ok, let me ask you this – which is your favorite, your right leg or your left? BOTH of course!

Please check out Edale’s links below!