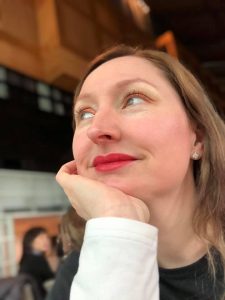 I’ve been a bit slack with my blogging of late, with writing and publishing and marketing and all that time-consuming stuff, ah, consuming my time. Sorry about that.

Born and raised in Tasmania, Australia, N E Absolom lives with her husband and their herd of overly spoiled indoor felines. She loves good stories, snacks, and sleeping in late. When not writing, she moonlights as a very ordinary office worker, and when she’s not doing that, she’s battling her way through an extensive video game collection.

N E Absolom is truly convinced that unicorns exist, and if she can’t meet one, she can at least write about them. 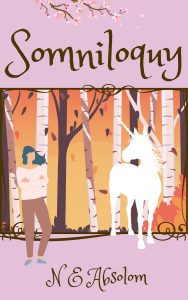 When her wish is finally granted, thanks to a mysterious cat, she finds that sometimes the fantasy is better than the reality: this unicorn is a bit of a jerk!

Join Sara on an adventure across time and space, where dreams and reality are one – where a normal, boring, thirty-something woman can turn out to be quite extraordinary.

With the help of a cantankerous unicorn, a magical cat and a handsome scholar, Sara will need to overcome her own failings in order to save Palantia – the universe, even! – from the nefarious schemes of a corrupted fae.

Can she pull herself together in time to save us all?

Somniloquy is an adventurous tale of magic and dreams, and learning to believe in oneself along the way. When everything seems dark and difficult, kindness is the key, and even the smallest hero can make a difference.

My genre is fantasy but with a middle-aged heroine. Fantasy is usually the playground of young adults. I wanted to write a book for people my own age.

I’ve always loved fantasy, and I love the formula of the hero’s journey and good triumphing over evil. I particularly like stories where the characters live simple lives, close to nature, but with magic all around them. For me, fantasy is an escapism from the daily grind. If there’s unicorns in the story, then that gets another big tick. It stood to reason I would write in the genre I most love to read.

Somniloquy is one of a range of sleep disorders (collectively sleep disorders are called ‘parasomnia’). It means ‘sleep talking’. One of the premises of the book is that a special human (the Dreamer) sleeps for a thousand years, dreaming the world into being in various ways, and from time to time, they talk in their sleep. The words they sleep-talk are recorded so scholars have try to find meaning in them. Sometimes they are just the mutterings of a sleeping Dreamer, other times they have power and can be portentous. As with any prophesy, you won’t know until the event happens to know it’s prophesy.

The story centres on Sara Stevens, a woman in her late 30s who is a loner who never found her place in the world. She still has a child’s imagination and believes in magic and unicorns. These qualities are sought after in the world of Palantia, where their current Dreamer is beginning to wake up.

However, Jehn, a scholar with a mysterious past, suspects the Dreamer is afflicted by more than the expected Awakening, and he sets forth in motion a plan to find a potential candidate for the Dreamer’s replacement, and then sets off to the main city to outline his suspicions and request assistance.

Sara is brought to Palantia by a hummingcat, a magical creature that can teleport at will and move between worlds. Sara meets a sullen old unicorn, Terentius, who begrudgingly teaches her about the role she may choose to play, and mentors her in her latent powers.

Meanwhile, unbeknownst to all, a corrupted fae has devised a plan to siphon power from the current Dreamer (and the potential new one!) which would bring about the destruction of both Palantia and our world as well.

It’s up to Sara to prevent that, but her insecurity is constantly getting the better of her. She must learn to believe in herself and stand up for love and kindness, or the entire universe could implode. No pressure!

I, of course, love all my characters, but my favourite is the hummingcat. She really is the hero of the story and she is so full of personality without saying a single word. She is smart and insightful, and she lives up to her true name, Leandra Lus’-a-chraois (which translates to the Brave Honeysuckle). Hummingcats are proud creatures, and take names seriously, but she’ll let you call her Honeysuckle for short, if she likes you.

I had a lot of fun writing her in a way that I imagined my own cats would behave. It doesn’t hurt having them as a constant source of inspiration.

I’m working on the sequel to Somniloquy. It’s called Pavor Nocturnus (which means ‘night terror’). I had the idea to title each book in the series around sleep disorders, so the series will be known as the Parasomnia Chronicles. I won’t go into too much detail because I don’t want to spoil anything about the first book!

I’m also working on a non-fiction memoir which is about my life with all the cats I have known and loved. Yes, I’m a crazy cat lady!

Do you want each book to stand on its own, or are you trying to build a body of work with connections between each book?

I wrote Somniloquy as a standalone, but it had so much potential for a sequel, or a series, I couldn’t just let the world be without venturing back. Who knows where that may lead!

As a writer, what would you choose as your mascot/avatar/spirit animal?

Fan art. If someone loved my story and characters enough to be inspired to create art based on them, that would be success. On, and buckets of money too, please.

Not anymore. I write every day without fail. If I’m really not feeling inspired to work on my novel, I’ll do another form of writing. I’ve learned to trust in my creative brain and let it run free. I no longer write in scene order, I just write whatever strikes me, and I’ll put it together later.

You can catch up with N E Absolom at the following: