Just a quick post, guys. It’s all covered in much more detail in my newsletter and on various social media platforms, but I just have to scream it from the rooftops from everywhere. And that includes this humble blog.

The first Jack Lisbon novel in the Fighting Dirty series, Kill Shot, is due for release exclusive to Amazon on 9th December 2020.

Pre-orders of the novel have already exceeded those for every other book I’ve written. Now, I’ll grant you that’s not a helluva lot, but still, I’m super happy with the result. Fingers crossed it strikes a chord with lovers of mysteries, thrillers and crime fiction with a vigilante justice flavour.

If you haven’t had a taste of Jack yet, think of an old school hard-boiled detective from the UK television series, The Bill. Someone like Frank Burnside. A hard-working cop with a rough exterior. He takes no crap from the bad guys, has some dark secrets in his past and he’s unlucky in love. Jack is driven by a thirst for justice, by the book or whatever it takes. An ex-boxer, he’s quick with his fists when words don’t work.

The prequel, Fighting Dirty, sets the scene with Jack working his last case for the London Metropolitan Police. In hot water for accepting a bribe and evidence tampering, Jack finds himself cornered with only one way out. Things go from bad to shite, and in the end he is forced to resign or be fired. His boss dangles a lifeline – apply to the Queensland Police Service, relocate to another country, resurrect your broken career. 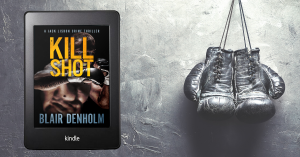 And that’s where Kill Shot takes up the action, in the tropical North Queensland town of Yorkville. Now, don’t go looking for it on a map, you won’t find it. But I hope I’ve managed to evoke the steamy tropics in a setting that should look familiar to anyone who’s visited the region north of the Tropic of Capricorn. In his new role as a Detective Sergeant with the QPS, Jack’s a changed man. He’s given up the cigarettes in favour of nicotine gum, the booze is a constant temptation but he manfully resists. He’s training hard in the gym, hitting the bags and running the streets instead of sitting in the pub getting wasted and cursing the world for his misfortune. The question is, can Jack remain on the straight and narrow?

DS Lisbon’s first big case in Yorkville tests his resolve. Jack finds himself swept into the dark world of illicit trade in human growth hormone and steroids, dodgy MMA fighters and trainers, murder and…crocodiles.  Fast-paced and full of action, I do hope you grab yourself a copy and become one of the growing legion of Jack Lisbon fans. He’s a joy to write and I’m having more fun with him that with any other character before.

I’me already writing the second novel, tentatively called Long Shot. I plan to have a box set called A Round of Shots ready for readers sometime next year. It’s a seriously challenging task, so wish me luck.