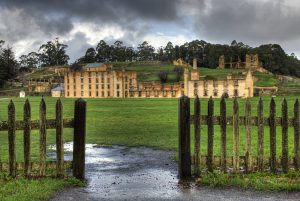 As 2020 rolls to its much anticipated conclusion, I’ve come to realize how lucky I am.

Lucky to have escaped a global pandemic completely unscathed. Endured a lockdown that was brief and, by all measures, effective. Stayed relatively healthy despite a few niggling ailments. But most of all, I’ve managed to achieve quite a bit in my fledgling crime fiction career. Two books published in one year is no mean feat for a self-confessed lazy writer. Next year, I’m stepping on the accelerator and have plans to knock out at least four Jack Lisbon novels. No, really!

That last success is in no small measure due to the fact I live in Australia, a country invaded/colonized by the British with the express purpose of offloading a bunch of criminals Old Blighty didn’t have the capacity or desire to handle any more. The worst of the worst were sent to prison colonies, primarily in New South Wales and Tasmania – out of sight, out of mind for England. And you couldn’t get much further away than Tasmania, the end of the world.

Today, being able to claim you are descended from convict stock is not something to be ashamed of, for many it’s a mark of pride. However, can it be any surprise that with so much genetic criminal material floating about in the blood of those descended from the convicts that Australia is such a fertile ground for crime – both real and invented? I think not! Throw into the mix the influx of European migrants, especially those from areas such as Sicily and parts of Yugoslavia – even Russia and Ukraine today – and it’s no wonder the Australian literary canon is chockablock full of amazing tales of wrongdoing committed and justice served.

One of the first grown-up Australian novels I read as a child was the incredible saga For the Term of His Natural Life by Marcus Clark. If you haven’t read this classic of Australian literature, I recommend it highly. It transports you back to a time of tough men and women, harsh and cruel punishment at the hands of the prison authorities, wild and unknown flora and fauna. It’s a story that’s been described as the Australian version of The Count of Monte Cristo, but to generations of Aussies who have grown up with this epic tale of adventure, it’s more than that. It’s the beginning of a journey into gutsy Australian crime fiction. For me, the fact the action features the world famous Port Author Jail is an added bonus – I now live a short drive from there. That’s what I call inspiration!

Most recently, a young Tasmanian author called Kyle Perry has set the world on fire with his debut novel The Bluffs.  Some others from the Apple Isle to make their mark in crime mysteries and thrillers are David Owen, Rohan Wilson, Barry Weston, Heather Rose and Stephen Brown. For an island with a small population, Tasmania punches well above its weight when it comes to producing first-class crime fiction writers. Deservedly, Tasmanian has been used as the location for a number of crime films and made-for-television series, including The Kettering Incident filmed a couple of years ago and enjoyed by audiences around the world.

So, for my last blog post for the Year of Our Lord, 2020, I’d like to thank Tasmania for affording me the opportunity to live here, and to draw inspiration from its environment, rich history and supportive literary community.