Back in a former life, I travelled to Russia when it was still part of the Soviet Union. I’d been accepted to study at an institute in Moscow. It was 1987, there was no Internet and life was much simpler than it is today.

I was studying Russian language at Queensland University at the time. When I enrolled at university, it was my dream to become a journalist. So I signed up for a double major in the English Department. As a sideline elective subject, I chose Russian. No idea why, it just seemed like a cool idea. I’d studied German at high school, so I figured it would be a logical progression. As it turned out, I did rather well in the Russian Department and I was invited to become an honours student. Just as well, because to the huge English department I was barely noticed.

Before I embarked on that trip to Moscow, little did I know how much it would change my life. I met some wonderful people from countries all around the world, many of whom are still my friends today. I improved my language skills to quite a high level, hard partying and skylarking notwithstanding. Other highlights were taking part in the Reagan-Gorbachev summit and getting married. The marriage lasted only somewhat longer than the summit, but that’s another story. Today, I use the language every day in my role as a translation coordinator for an international conservation organisation.

During my time at the Pushkin Institute of Russian Language, things were tough. There was nothing in the shops, and students often resorted to dabbling in the black market, buying scarce goods and selling them for a profit. Others indulged in the more serious illegal activity of changing foreign currency. If you got caught, you could cop some harsh punishment. The official exchange rate was terrible compared to what you could get on the black market. I availed myself of these services now and again, changing money with poorer students from the Third World who were often desperate to keep their heads above water.

As you can imagine, in such an environment there is plenty of potential for bad things to happen. Nothing especially nasty happened to me aside from getting ripped off occasionally.

A rumor spread among the student body that a black student from a nearby institute, the Patrice Lumumba University of Friendship, was lynched in the forest behind our college. People speculated. It was a race crime, it was payback for a deal gone wrong. Or maybe it never happened? This was at a time when information was tightly controlled, under a regime where the smart thing was to conform, not take risks. 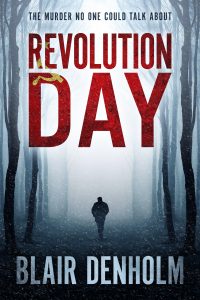 In any case, the story stayed with me for many years. I’ve discussed it with a good friend who had his ear closer to the ground and who is quite convinced the incident did happen. And there was a precedent. In 1963 a Ghanaian student was found dead in Moscow, far from the city he was registered in. A medical student from Ghana attended the autopsy and the man’s death was deemed to be a result of “misadventure”. I had no idea of this incident when I set out to write Revolution Day. It only came to light as I was googling to find something out – I can’t remember what – when a scholarly article popped up. I read Death of an African Student in Moscow: Race, Politics, and the Cold War, by Julie Hessler, with a huge amount of interest, to say the least. It opened my eyes and told me, yes! What we heard had happened could have happened.

This is a radical departure from my more “whimsical” crime fiction novels starring the irascible Jack Lisbon. Based on real events, I’ve been more serious in approach, however I’ve strived to keep it lively and fast-paced as usual.

Revolution Day is now to be submitted to Allen and Unwin as part of a crime fiction competition. If it doesn’t get picked up in September, don’t worry. I’ll get it out there under my own steam.