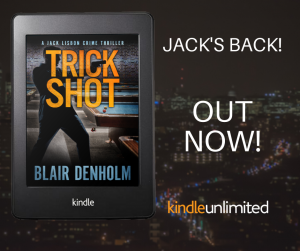 A little over a year ago I was ecstatic to be releasing the novella, Fighting Dirty. At the time, I had no idea this little book would lead to a series read and enjoyed by so many crime fiction lovers around the world. From a fan base of zero, I now have over 2,500 subscribers to my newsletter, with about 10 newbies signing up every day. To all of you, a huge thank you!

From those humble origins, Detective Jack Lisbon has figured in three full-length mystery and suspense thriller novels, with number four already underway. I seriously cannot see an end to these tales. Jack’s so much fun to write, as are his able assistants, Detective Claudia Taylor and Constable Ben Wilson. Not to mention the ensemble of supporting players.

I love being able to contribute, in my own small and humble way, to the canon of Australian crime fiction. Some of my readers tell me they are also big fans of well-known Australian authors such as Garry Disher, Jane Harper, Michael Robotham and Dave Warner. To be considered in such esteemed company is indeed an honour.

But back to Trick Shot. Preliminary reviews are all positive (that won’t last forever, so I’m enjoying the pats on the back while they’re coming), with readers already clamouring for the next installment.

Writing book four, Shot to the Heart, is proving a little harder than the first three. Mainly because the action kicks off in London, where I haven’t visited in a long, long time. Then Jack chases the baddies across England, into Scotland as far as the Orkneys, where I’ve never set foot! This takes me out of my comfort zone and requires a tad more research to get the details right. Luckily, I have a secret weapon: a fan of Jack Lisbon who lives in those very same remote and blustery isles. Which is kind of amazing, if you think he couldn’t live much further away from me, tucked away in Tasmania at the south-eastern tip of Australia. The distance, which I just Googled, is 17,298 km (10,748 miles)!!!

Speaking of volunteer reader helpers, another guy popped up out of nowhere to lend a hand with my proofreading. He doesn’t miss a thing, and I’m so grateful for his efforts, which he offers for the grand sum of “totally free”. That’s on top of my official checker, who also doesn’t charge me for his services. How lucky am I?

Very lucky, and I count my blessings daily.