Just a quick update to let you know that my next Jack Lisbon crime fiction novel, Drop Shot, is set to launch on 8 July.

Why have I picked that date?

Well, generally the dates I pick for book launches have nothing to do with anything. However, since this book revolves around the world of professional tennis I wanted to release it around the time of the Wimbledon grand slam tournament. The men’s final is scheduled for 10 July, which is a Sunday, but that’s not the best day to launch a book. At least, that’s the common wisdom. Maybe it would work, but why take a chance?

Prior to book No.5 in the Fighting Detective series coming out, there’ll be a brand new cover for book No. 1 in the series, Kill Shot. I’ve commissioned this cover through a big agency called Damonza, based in New Zealand of all places! I picked them after reading a novel by an author I admire, Andrew Turpin, and saw that he gave an acknowledgement to them at the back of one of his books. I thought, why not give them a go? And I have to say the result is nothing short of stunning. Cinematic, almost. I think a new look will be just the thing to give my Australian crime fiction hero a little boost.

I’ll let you in on a little secret, dear reader. Many people who know me think I am waaay more successful as an author than I really am. I guess that’s down to my ability to blow my own trumpet on occasion. Don’t get me wrong, I am thrilled the way things have gone for me, for the most part, however the financial success has not been as great as I’d hoped. There are many reasons for this – bad decisions, taking the advice of people I shouldn’t have, and trusting others to do amazing things for me in terms of paid marketing that were flops. Also, I’m a bit of a lazy sod when it actually comes to sitting down and doing the thing. You know, the writing. It’s funny, some folks call me “prolific” because I’ve written the number of books I have. Here’s an admission: if I tried harder, there would be twice the number of Australian mysteries and thrillers out there with my name on them.

Anyhow, here’s a sneak peak of the cover for Drop Shot. It, too, will change down the track (pending improved results with the new cover of Kill Shot, which I’ll show you in a blog post as soon as I have the final version in my hot little hands). 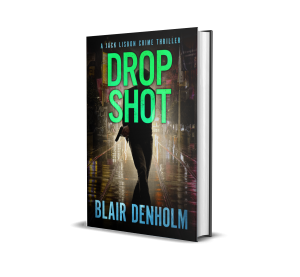