The next instalment in the Jack Lisbon Fighting Detective series, “Point Blank” is set to launch on Amazon on 23 December 2022.

I had hoped to have it published early November, but I have more excuses than Jack Lisbon has taken punches to the head, so I’m not even going to try and justify this one. Suffice to say, I’m relieved it’s going to come out this year rather than 2023. Next year I’m aiming to up the production cycle to warp-speed Mach II, with my next book the second in the Russian Detective series, tentatively entitled “The Defector”.

But getting back to “Point Blank”, if you like to read about golf, drones and murder, then this one will be right up your street. And even if you don’t, then I’m sure you’ll get a kick out of it, particularly if you’ve enjoyed previous Jack Lisbon stories. “Point Blank” is set to become another cracker in the growing sub-genre of Australian crime fiction (and that’s my totally unbiased opinion).

Anyhow, here’s a sneak peak of the cover for “Point Blank”. As I write this post, only the e-book is up for pre-order, however the paperback version will be out very soon. 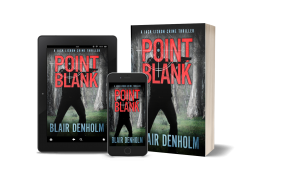 So, apart from finishing off novel number 6 in the Jack Lisbon series, what have I been up to? Generally, fretting about the state of the weather in my home state of Tasmania. It’s already the middle of the first month of summer, and we are still lighting the wood-burner on a semi-regular basis to keep warm. Thankfully we aren’t in the predicament of those facing energy shortage in the Northern Hemisphere, with a horrible winter looming (the snowy streetscapes of London today, although breathtakingly beautiful, fill my heart with worry for locals). But why would I be in a flap about the cool weather in Tassie? Well, I’ve raised some pretty awesome tomato plants from seed – for the first time ever – but I’m not sure I’m going to get much of a crop out of them. Around the garden, there must be close to 40 plants, both bush and vining varieties. However, sunshine is in short supply. When the plants went from the seedling trays into the raised beds, my hopes were high. But this unseasonal cold spell could…ah…spell disaster for my poor tomatoes.

Never mind, though, there are plenty of folks with much more pressing issues than a vanity hobby-gardener’s woes. And with that in mind, I bid you, dear reader, a wonderful upcoming Christmas and New Year. May all the wars and conflicts end, and may our rulers (who are convinced they are our betters) finally see sense and start treating people with respect and give them the freedom to live how they want in peace! End of speech.