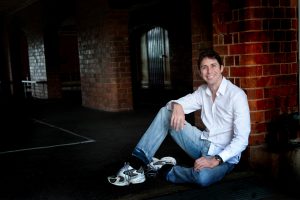 Chris Johnson is an Australian author who lives in Brisbane with his wife and daughter. His books blend the esoteric mysteries, science fiction, fantasy, with a dash of Twilight Zone, and a twist of dry humour. He has published numerous short stories and novels, and has many more to come.

Chris Johnson’s story and book ideas come from a rich background as a stage magician, a mentalist, a psychic, and even a computer systems programmer! He also blames growing up in the 1980s on a diet of Atari computer games and television shows. Onstage, he used to read people’s thoughts; bend spoons, keys and forks; and he predicted newspaper headlines up to a week before their publication (including the Los Angeles Riots of 1992).

Nowadays, he still performs, but he also entertains people through his stories, which always include an element of the weird and wonderful, the bizarre or the supernatural.

His first book, Twelve Strokes of Midnight, is a collection of short stories, steeped in twists and turns, containing threads he says may lead into his other works and even each other. Each short story in the Devil’s dozen coincides with a clock strike, drawing you into the witching hour and the impending horrors watching you from the shadows. 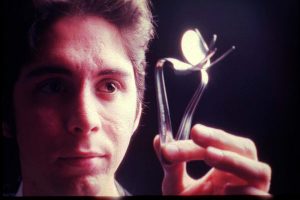 I always enjoyed writing and creating stories. My earliest recollection of thinking I’d like to write a book is in the Summer of 1982/1983 and I started a book called Journey To Ekka. I was eleven. A year later, I started another called Hunter; it was about a superhero. Readers of Dead Cell will catch wind of this same hero with a different name: Predator. I “completed” the novel in 1997. Maybe I will publish it one day. 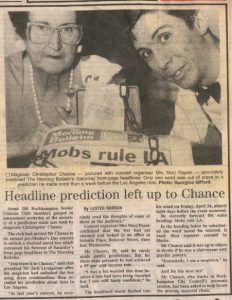 I’ve just finished While He Was Sleeping, a supernatural thriller set in 1986/87, which is due for release on 15th March 2020. It’s in marketing and promotion right now while I rest.

But after that, a few projects stand out in mind for me including another anthology, a self-help book (related to my work as a mentalist), and a few other things. One of them may involve Craig Ramsey, my psychic detective character from Dead Cell and Demon Blade.

I think following every other writer’s rules and idiosyncrasies is a trap.

Kill all adverbs and adjectives.

Adhere to this target.

Don’t hang yourself on every bloody rule. Plenty of better writers, successful writers, too, break those same rules and more.

Yes. A writer must learn their craft, study each tool and how to use it, but then learn how to change things to match.

Have you ever had reader’s block?

Reader’s block? Never heard of it.

Neither have I had writer’s block, but there are times the “zone” locks me out like a prickly pub owner. But there’s always a reason called life.

Look after your body, your health, and keep your family in order first. Writing comes afterwards… or you may end up like Hemingway.

Do you try more to be original or to deliver to readers what they want?

I try a little of both.

Having been an entertainer for most of my life, I know it’s not just about what I like. It helps, but my readers matter too.

What kind of research do you do, and how long do you spend researching before beginning a book?

Most research happens before I start writing, as I did for While He Was Sleeping. It contains elements of Tibetan Buddhism and mysticism. I researched it thirty years ago when I wrote the first outline. Yet it still helped to check out certain groups online and check other pieces when the need arose.

My technique was similar for Dead Cell. I researched weapons, their drawbacks, and the CIA experiments on psychics. Being a psychic entertainer helped fill things more. And I even asked a doctor friend of mine about some medical instruments.

Research is important but don’t wow the audience with a documentary. The story is king.

What’s the most difficult thing about writing characters from the opposite sex?

Getting inside their heads is the most difficult part. But research helps there too. Ask your significant other, a friend of the opposite sex, etc. Read other stories in that voice. It all helps.

I love this question. No matter what I say, no one will believe me.

A couple of people might read themselves (or others) in my stories. That says something, I guess, sort of like the song.

“You’re so vain. You probably think this book is about you…”

I believe in crowded minds more than writer’s block. Like I said about reader’s block, it’s merely a sign of an overcrowded mind. Relax. Take a break. Rebalance you’re life.

Silliest saying: He who lives by the sword gets shot.

Favourite song at the moment: Do-Wah-Diddy-Diddy (ever since I wrote While He Was Sleeping, it’s stuck in my head)

With writing, are you a plotter or (seat-of-your) pantser? Mostly a plotter, but if I have a section that I haven’t planned out, I pants it out when I get to it.

Star Wars or Lord of the Rings: Battlestar Galactica

Best superpower: Tying knots in cherry stems with my tongue

Number one thing to do on your bucket list: Live, not exist.

While He Was Sleeping

The new supernatural thriller from the author of Dead Cell and Demon Blade.

You were bullied constantly at school.

Your best friend and family discover your secret.

A girlfriend you never mentioned.

She is so loyal to you.

She hunts each bully.