I’m so excited to be embarking on a new crime fiction series, The Fighting Detective. My outlandish goal is to write a ton of books featuring DS Jack Lisbon. Is 18 too many? I don’t think so! In the can so far there’s a novella prequel (Fighting Dirty), a bonus short story exclusive for my newsletter subscribers (Take Down – if you don’t have a copy, you can get it here), and one full-length novel (Kill Shot).

With Kill Shot, we get to see how Jack handles his first big case Down Under. He’s landed in an environment as far removed from gray and dreary London as you could possibly get – the enervating heat of Australia’s tropical Far North Queensland. The first reviews to come in are super encouraging, with my growing audience especially intrigued by the unique main character and his relationship with his partner, Detective Constable Claudia Taylor.

What’s the Inspiration behind Jack Lisbon?

I guess I’ve always been drawn to stories with flawed main characters who try to do the right thing but whose weaknesses often make that difficult. Add to the mix the “fish out of water” aspect, some dry humor, a page-turning plot, and that’s my ideal set up right there. My aim with The Fighting Detective is to include all those elements, and more.

So where did I get the idea for Detective Sergeant Jack Lisbon, an ex-boxer with a shady past and a chip on his shoulder the size of a cricket bat? A lot of this inspirational stuff comes on a subconscious level, so wait five minutes while I put myself into a trance… 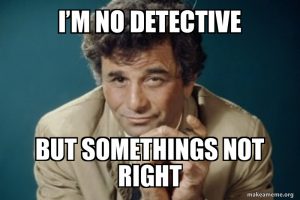 I’ve always been a fan of TV police dramas. This goes way back to my childhood, where I was enthralled by the charisma of small screen cops. My favourites were Columbo, an intellectual homicide detective from the Los Angeles Police Department, and Kojak, a bald, lollipop-sucking, wise-cracking Lieutenant from the NYPD. Then there were the action junkies, Starsky and Hutch, part of the emerging trend to “buddy up” cops. With two detectives on the case, everyone had their favourites. But whether it was solo sleuths or detective duos, these guys always got their man or woman, through tenacity, deduction and hard work. The characters were larger than life, providing hours of entertainment for TV crime lovers who could never get enough of their heroes.

Living in Australia meant we got to watch the best entertainment from every corner of the Earth. In addition to the hugely famous and popular American shows, we were blessed – and still are – with an abundance of crime dramas from the UK and our own excellent domestic productions. British programs I lapped up eagerly included The Bill, The Professionals and The Sweeney. Some Aussie favourites were Homicide, Cop Shop, Blue Heelers and Water Rats. And that’s barely scratching the surface. God knows how many hours I would have spent in front of the TV watching those shows!

But what about the boxing? Why is Jack an ex-boxer? Perhaps the inspiration came from Rocky Balboa, or some real life fighters who overcame adversity. Or even those noble warriors who ended their careers crushed and defeated, yet with their pride still intact. Whatever the case, combat skills sure come in handy when your pistol jams.

And finally, there’s going to be a sporting thread running through most of this new series. I’m not ashamed to admit it, I love sports. I will happily watch almost any kind of sport on TV or, even better, at the stadium. As a younger man, I played basketball at a competitive level. As a kind of homage to those halcyon days, the second book in the series that I’m currently writing is called Shot Clock, centered around the murder of a professional basketball coach. It’s got more twists and turns than a bag full of licorice!

Like most writers, though, for me inspiration comes from a combination of lived experiences, the creative works of others, and a wildly fertile imagination.